BACKGROUND
Mt. Amuyao is the country's 10th highest mountain and an important physical and cultural landmark in Mountain Province. Together with a traverse of Mt. Ugo and Mt. Napulauan, a traverse of Mt. Amuyao is one of the great hiking trails of the Cordilleras. Of the three, it is considered the most challenging, taking the hike from the mountainous town of Barlig, Mountain Province to the summit of Amuyao, then off to a lengthy but well-maintained trail to the scenic villages of Pat-yay and Cambulo and finally to Batad, home of the amphitheatre-like rice terraces that is a UNESCO World Heritage site. The entire trip takes 3-4 days - a realchallenge - but the cultural and natural wonders seen in the trek make it a worthwhile expedition. Highlights include the pine forests up from Barlig, the summit views of Mts. Pulag, Napulauan, and even the Kalinga mountains north, the enchanting flora on the traverse trail, and of course, the villages. Sidetrips to Tappiyah waterfallls, the viewpoint at Banaue, as well as the other wonders of Barlig and Batad, creates possibilities for an even deeper 'immersion' into the heartland of Ifugao culture.

More information in Mt. Amuyao can be found on the main Mt. Amuyao article at PinoyMountaineer. This blog entry focuses on the traverse trail.

TRAVERSE TRAIL
Barlig → Mt. Amuyao summit(5-6 hours; 4.1 km SE): Evenlysteep, but the trails are comfortable and reasonably wide. There are no thorny plants or noxious fauna or flora, so you
would only have to prepare for the cold. The trail would only be hazardous when muddy - it gets slippery when wet so it's preferrable to climb Amuyao during the dry half of the year (November-early May) even as one still has to possibility of rain. Since the trails are very friendly, night trekking is a possibility to make sure you reach the bunkhouses at the summit on Day 1. Landmarks at the Barlig trail include the Barlig Viewpoint where you can catch a glimpse of Amuyao's summit as well as the town beneath.

Summit → Pat-yay (4-5 hours; 6.1 km SE): First you'll walk through a ridge facing south. To the left are the mountains of the central Cordilleras - Mt. Pulag is flanked by Mt. Tabayoc; closer to Amuyao are Ifugao's Mt. Napulauan. To the right is Cagayan Valley and the faraway mountains are that of the Northern Sierra Madre. This trail is very beautiful especially during the summer months when the pink flowers (Melastoma sp.) are in full bloom and the pines and other evergreens rise majestically beside the clouds. After this breathtaking scene, you would descent into the mossy forest. Although it is not as grand as the lush montane forests of Napulauan, the trek is still pleasant, with the trails remaining clean and without trees or shrubs to obstruct you. The descent is steep, though - this is a given throughout the traverse trail. In Tagalog, "Basagan ng tuhod" could be an apt description. That's why one has to leave Mt. Amuyao's summit early in the morning to make trekking more relaxed. Midway is cemented shed with a nearby water source. Less than an hour before Pat-yay, the forest will give way into a grassy, level area and you'll encounter a stream. The entrance to Pat-yay is worthy of pictures, as its terraces come into view; with traditional Ifugao huts giving accent to the bucolic atmosphere. Hopefully, you would arrive at Pat-yay by lunchtime, take a one hour break and prepare to resume trekking.

Pat-yay → Cambulo (5-6 hours; 7.0 km WSW): Pat-yay is almost equidistant between the Amuyao summit and Cambulo. Take note however that by the time you reach Pat-yay, you've already descended more 1500 meters! Just as you've had enough descent, it would be time to ascend the mountain of Pat-yay, which is around 1400 MASL at the highest point you'll reach. Then it's a westward descent to the village of Cambulo. Just like the approach to Pat-yay, the forest trails give way to foothpaths which in turn give way to the narrow paths of the rice terraces (in Tagalog, 'pilapil') which could be even more challenging than the descent trails. Aim to reach Cambulo before nightfall; otherwise you can do an e-camp just above it, in view of its terraces. The pilapil are hard to negotiate at night. But it's still better to really press for Cambulo so as to maximize the time in Batad the next day. Cambulo, like Pat-yay, is a small village; there is no electricity although some households have solar panels. There are sari-sari stores but be prepared to pay steep prices! The elevation, at 947 MASL, makes Cambulo the lowest point of the entire traverse trail.

Cambulo → Batad saddle (3-4 hours; 4.2 km S): Ideally done on the third day, from Cambulo one heads south to Batad. This is perhaps the easiest part of the traverse, with not much steep trails; this is also commonly used by locals, and Cambulo is also emerging as a tourist attraction. The trail would take you to the very terraces of Batad, which take the form of an amphitheatre. This splendid sight is the grand finalé of the traverse. You will go down the rice terraces; turn right to the village proper where a registration is made. Touristy souvenirs, like necklaces, shirts, and the like, are for sale since Batad is one of the famous places in the Cordilleras. If you arrive at Batad early - around lunchtime - you can spend the early afternoon visiting Tappia (Tappiyah) Falls. You can tidy up in Batad. Then it is an ascent up the saddle at Batad - the furthest point reachable by jeepney. Usually climbers arrange for a jeepney to pick them up at this point and take them to Banaue. End elevation is 1060 MASL. The approximate total distance of the traverse is 21 kms.

ITINERARY
Traverse from Barlig to Batad

*It is argued that a 4-day AmTrav would be more advisable: in this setup, one can spend more time at the summit on the morning of Day 2; it is a relaxing 5 to 6-hr. trek down to Pat-yay on that day, and the next day is devoted to reach Cambulo. Basically, this just expands what would've been a strenuous Day 2 into two relaxing legs.

TRAIL AND NAVIGATION MAP
Click on the image to see the full-size map. Note that some of the data are approximates and the map is only meant to be a fairly-reliable overview of the trail and topography.


SPECIAL CONCERNS
For the traverse, the guide fee is P1200/day, vis-a-vis the regular P500/day for the regular Amuyao climb. Reasons cited by the locals include the difficulty of the trail and the fact that only a few guides knowthe trail. Apparently, only several groups do the traverse in a year. Even our guide, Abner, says it was only his fourth traverse. As in the we

If renting a jeep from Banaue, you may arrange for the same jeep to pick you up at the Batad saddle. Jeepney rental rates vary; P1500-P2000 is reasonable for the Batad pick-up.

For logistics, registration, and other special concerns regarding Mt. Amuyao, please check out the main Mt. Amuyao article.

TRIVIA
Another possibility is a traverse to Mayaoyao, Ifugao. Instead of heading off to Cambulo from Pat-yay, there is a trail that leads to Mayaoyao town (see trail map). Attractions here include the rice terraces.

I've heard of a group that did a Batad-Barlig traverse but my source said it was so difficult they had to back out! 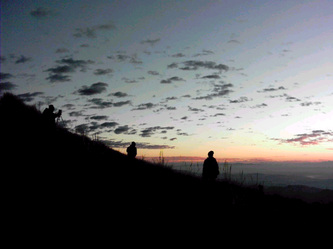 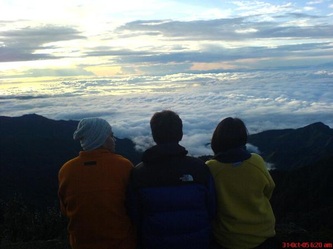 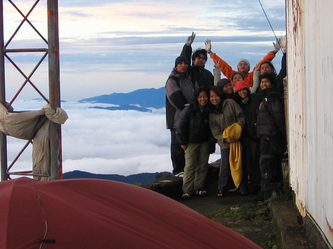 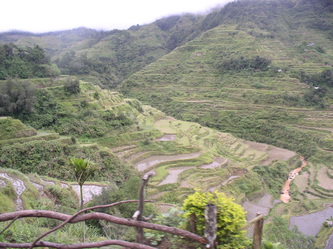 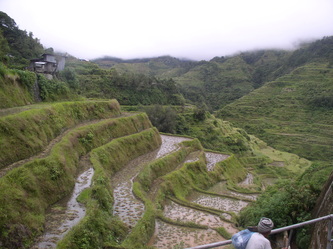 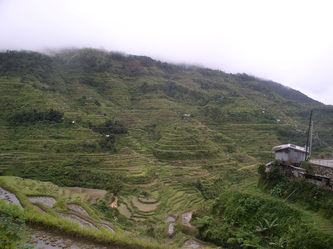 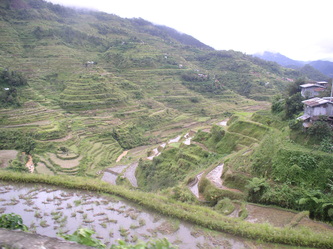 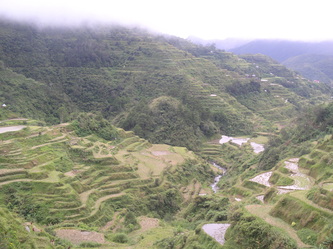 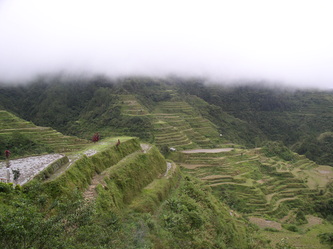 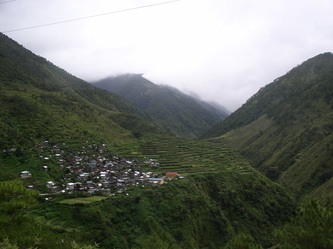 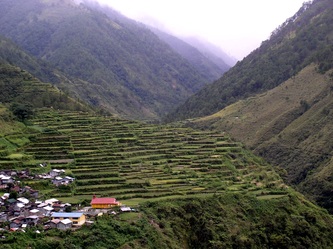 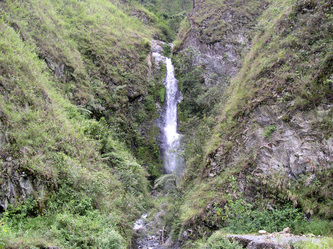 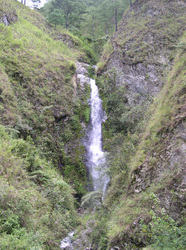 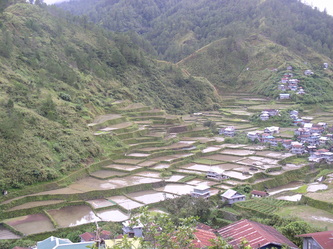 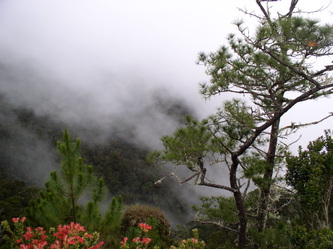 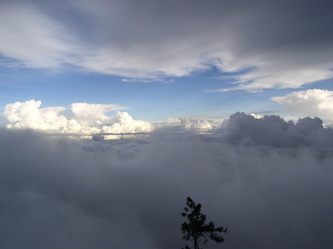 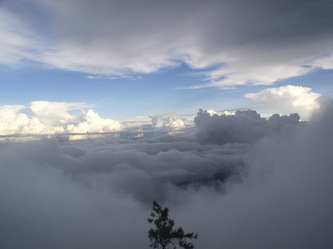 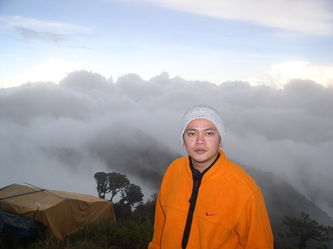 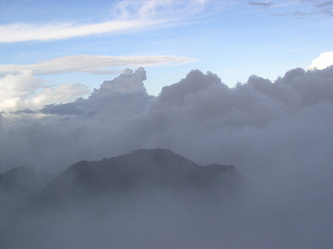 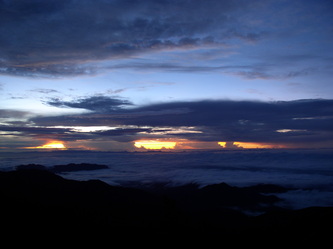 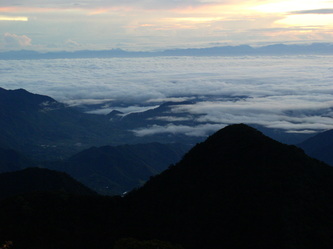 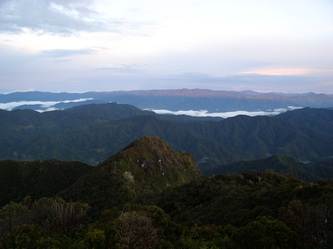 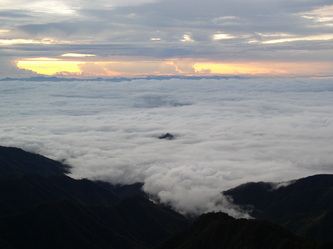 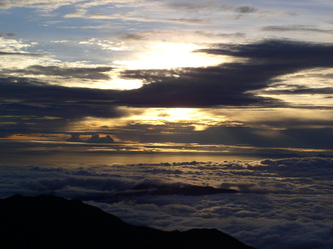 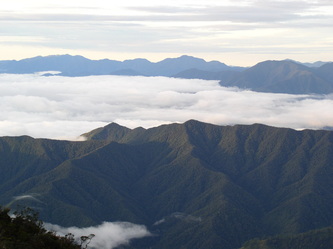 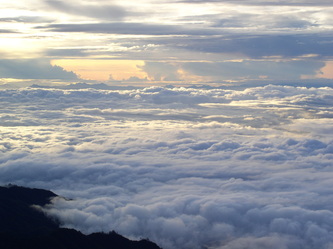 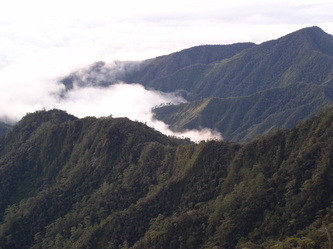 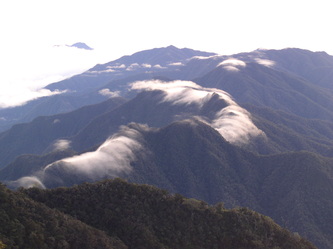 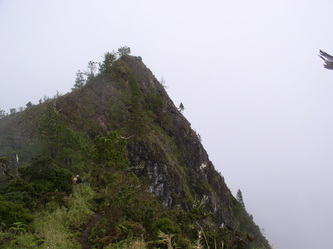